S. Stanley Young: Are there mortality co-benefits to the Clean Power Plan? It depends. (Guest Post)

Are there mortality co-benefits to the Clean Power Plan? It depends.

Some years ago, I listened to a series of lectures on finance. The professor would ask a rhetorical question, pause to give you some time to think, and then, more often than not, answer his question with, “It depends.” Are there mortality co-benefits to the Clean Power Plan? Is mercury coming from power plants leading to deaths? Well, it depends.

So, rhetorically, is an increase in CO2 a bad thing? There is good and bad in everything. Well, for plants an increase in CO2 is a good thing. They grow faster. They convert CO2 into more food and fiber. They give off more oxygen, which is good for humans. Plants appear to be CO2 starved.

It is argued that CO2 is a greenhouse gas and an increase in CO2 will raise temperatures, ice will melt, sea levels will rise, and coastal area will flood, etc. It depends. In theory yes, in reality, maybe. But a lot of other events must be orchestrated simultaneously. Obviously, that scenario depends on other things as, for the last 18 years, CO2 has continued to go up and temperatures have not. So it depends on other factors, solar radiance, water vapor, El Nino, sun spots, cosmic rays, earth presession, etc., just what the professor said. 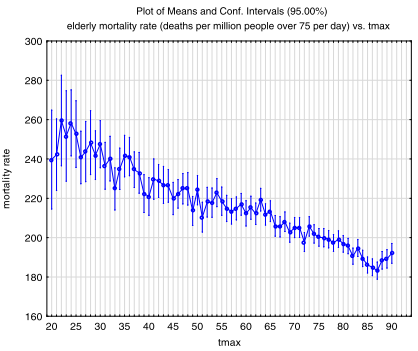 So suppose ambient temperatures do go up a few degrees. On balance, is that bad for humans? The evidence is overwhelming that warmer is better for humans. One or two examples are instructive. First, Cox et al., (2013) with the title, “Warmer is healthier: Effects on mortality rates of changes in average fine particulate matter (PM2.5) concentrations and temperatures in 100 U.S. cities.” To quote from the abstract of that paper, “Increases in average daily temperatures appear to signiﬁcantly reduce average daily mortality rates, as expected from previous research.” Here is their plot of daily mortality rate versus Max temperature. It is clear that as the maximum temperature in a city goes up, mortality goes down. So if the net effect of increasing CO2 is increasing temperature, there should be a reduction in deaths.

I have a very large California data set. The data covers eight air basins and the years 2000 to 2012. There are 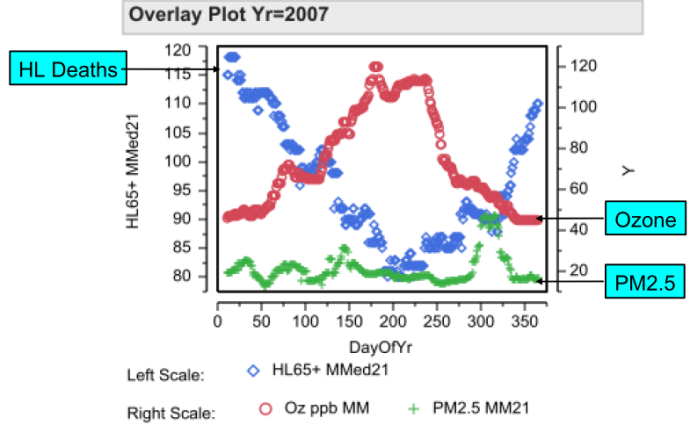 over 37,000 exposure days and over two million deaths. The data for Los Angeles for the year 2007 is typical.

A purported co-benefit of lower CO2 is that there will be lower levels of PM2.5. (PM2.5 is not chemically defined, but is partially made up of combustion products.) It is widely believed that lower levels of PM2.5 will lead to fewer deaths. Here is what Cox et al. (2013) have to say, “Unexpectedly, reductions in PM2.5 do not appear to cause any reductions in mortality rates.” And here is their supporting figure below. 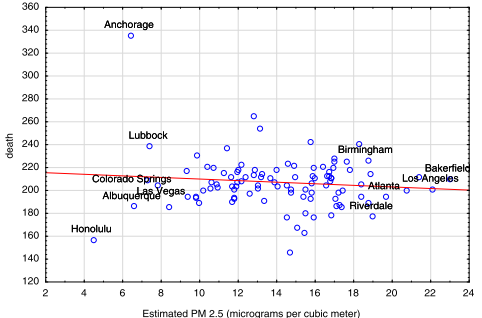 Many claim an association of air pollution with deaths, acute and chronic. How can the two sets of claims be understood? Well, it depends. Greven et al. (2011) say in their abstract, “… we derive a Poisson regression model and estimate two regression coefﬁcients: the “global” coefﬁcient that measures the association between national trends in pollution and mortality; and the “local” coefﬁcient, derived from space by time variation, that measures the association between location-speciﬁc trends in pollution and mortality adjusted by the national trends. …Results based on the global coefﬁcient indicate a large increase in the national life expectancy for reductions in the yearly national average of PM2.5. However, this coefﬁcient based on national trends in PM2.5 and mortality is likely to be confounded by other variables trending on the national level. Confounding of the local coefﬁcient by unmeasured factors is less likely, although it cannot be ruled out. Based on the local coefﬁcient alone, we are not able to demonstrate any change in life expectancy for a reduction in PM2.5.” (Italics mine) In plain words, associations measured from location to location, which are likely to be affected by differences in covariates, show an association. Examination of trends within locations, which are less likely to be affected by covariates, show no association. In short, the claims made depend on how well covariates are taken into account. When they are taken into account, Chay et al. (2003), Greven et al. (2011), Cox et al. (2013), Young (2014), there is no association of air pollution with deaths. Chay controls for multiple economic factors. Greven controls for location. Cox controls for temperature. Young controls for time and geography.

Note well: The analysis of Young (2014) uses a moving median within a location (air basin). This analysis is much less likely to be affected by covariates. This analysis finds no assocation of air pollution (PM2.5 or ozone) with deaths. Several figures are instructive. The figures are for LA, but are typical for the other California air basins. First ozone:

The figures were constructed as follows. From the daily death total was subtracted a 21-day moving median. This calculation corrects for the time trend in the data. From the daily air pollution level the 21-day moving median for the air pollution was subtracted. The daily death “deviation” was plotted against the pollution “deviation”. If air pollution was causing deaths, then the density in these three figures should go from lower left to upper right. To examine if previous air pollution, e.g. yesterday or the day before, was associated with current deaths, lags of 0, 1, and 2 days were used, hence the three figures. Plots like these were computed for all eight air basins; the figures for LA are typical. Next we give the same sort of figures, but for PM2.5. Again, LA.

Again, the density is concentrated at zero PM2.5 and zero deaths, and, the important point, there is no tilt of the density from lower left to upper right. And again the plots for LA are typical of the other seven air basins.

We can consider the question of interactions of air pollution with geography more deeply. Greven et al. (2011) state in their abstract, “Based on the local coefficient alone, we are not able to demonstrate any change in life expectancy for a reduction in PM2.5.” and they go on to say differences in locations (geographic heterogeneity) is most likely due to differences in covariates, e.g. age distributions, income, smoking. Indeed when Chay et al. (2003) corrected their analysis for an extensive list of covariates, they found no effect of the EPA intervention to reduce air pollution.

There is empirical evidence and a logical case that air pollution is (most likely) not causally related to acute deaths. Heart attacks and stroke were recently removed as a possible etiology, Milojevic et al. (2014).

Economics on the back of an envelope

The EPA claims saving 6,600 deaths per year due to CPP. They value each death at nine million dollars giving a co-benefit of $59.4B. But analysis that takes covariates into consideration finds no excess deaths due to ozone or PM2.5. The $59.4B co-benefit is the result of flawed analysis. And what is the cost of the regulation? The EPA says CPP is the most costly regulation it has considered and puts the cost at up to $90B/yr. The National Manufacturers Association puts the cost at $270B/yr, $900/person/year in 2020.

Consider Figure 4b of Young and Xia (2013). The data used in this figure is that used in Pope, Ezzati, and Dockery (2009) and was kindly provided by Arden Pope III. Change in income and air pollution 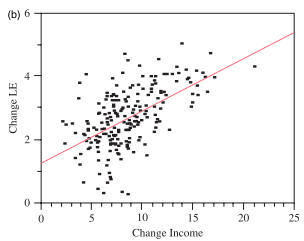 from ~1980 to ~2000 was used. Income in thousands of dollars increase over that time period, but differed in magnitude from city to city, the x-axis. Life expectancy increased as well, y-axis. The general trend is very clear, increased income is associated with increased life expectancy. The income-life expectancy relationship is well-known. See the dramatic video by Hans Rosling (2010). To the extent that regulations are expensive, they should move people down and left in this figure with life expectancy less than it would have been. For example, $900 less income is expected to reduce life expectancy by two months.

So, do you want the EPA CPP regulations to extend your life not at all, costing you $900/yr or do you want to have use of your own money and save two months of your life? It depends. EPA decides or you decide.

Jerrett M. (2010) California-specific Studies on the PM2.5 Mortality Association. See slides 12 and 13, no increase in “All causes” death rate, http://www.arb.ca.gov/research/health/pm-mort/jerrett.pdf.

NOTE FROM MAYO: I invited Stan Young for an update on his work on this. I let guest posters defend their own arguments, if they wish. A little challenge for a Saturday night. 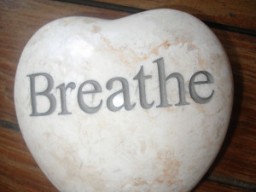 35 thoughts on “S. Stanley Young: Are there mortality co-benefits to the Clean Power Plan? It depends. (Guest Post)”