Little Bit of Logic (5 mini problems for the reader) 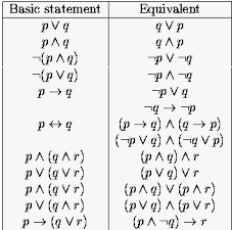 Equivalently, using the definition of deductive validity that I prefer: A deductively valid argument is one where, the truth of all its premises together with the falsity of its conclusion, leads to a logical contradiction (A & ~A).

Show that an argument with the form of disjunctive syllogism can have a false conclusion. Such an argument take the form (where A, B are statements):

Abbreviate it as D.S.  An example of D.S. with a false conclusion is:

(a) Now you give me an example of D.S with a false conclusion. Put it in the comments.

(b) What do you know about the premises of a valid argument that has a false conclusion?

Invalid Deductive Argument: One where it’s possible to have all true premises and a false conclusion. Example: affirming the consequent.

(c) Give an example of an argument following the form of affirming the consequent that has all true premises and a false conclusion. (See my slides for one. then supply one of your own in the comments.)

See a bit more logic below these slides.

*This is all semantics-relating to truth and meaning. We want a system that matches the semantics with proofs and derivations (part of its syntax). In particular, we want two things:

(d) One of these is speaks to the consistency of the system, the second, to its completeness. Which is which?

(e) I said any deductive argument with contradictory premises A, ~A is valid. That follows the semantic definition of validity. On the syntactical or proof-theoretical side, show how to derive any arbitrary claim C from A and ~A.

You will find a brief discussion of logic in Excursion 2 Tour I of Statistical Inference as Severe Testing: How to Get Beyond the Statistics Wars (Mayo 2018, CUP).