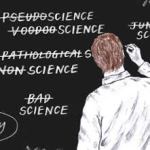 I heard a podcast the other day in which the philosopher of science, Massimo Pigliucci, claimed that Popper’s demarcation of science fails because it permits pseudosciences like astrology to count as scientific! Now Popper requires supplementing in many ways, but we can get far more mileage out of Popper’s demarcation than Pigliucci supposes.

Pigliucci has it that, according to Popper, mere logical falsifiability suffices for a theory to be scientific, and this prevents Popper from properly ousting astrology from the scientific pantheon. Not so. In fact, Popper’s central goal is to call our attention to theories that, despite being logically falsifiable, are rendered immune from falsification by means of ad hoc maneuvering, sneaky face-saving devices, “monster-barring” or “conventionalist stratagems”. Lacking space on Twitter (where the “Philosophy Bites” podcast was linked), I’m placing some quick comments here. (For other posts on Popper, please search this blog.) Excerpts from the classic two pages in Conjectures and Refutations (1962, pp. 36-7) will serve our purpose:

Confirmations should count only if they are the result of risky predictions; that is [if the theory or claim H is false] we should have expected an event which was incompatible with the theory [or claim]….

Every genuine test of a theory is an attempt to falsify it, or to refute it. Testability is falsifiability, but there are degrees of testability, some theories are more testable..

Confirming evidence should not count except when it is the result of a genuine test of the theory, and this means that it can be presented as a serious but unsuccessful attempt to falsify the theory. (I now speak of such cases as ‘corroborating evidence’).