This is a first draft of part II of the presentation begun in the December 6 blog post.  This completes the proposed presentation. I expect errors, and I will be grateful for feedback! (NOTE: I did not need to actually rip a cover of EGEK to obtain this effect!) 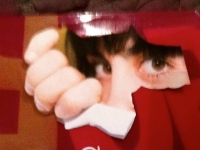 You have observed y”, the .05 significant result from E”,the optional stopping rule, ending at n = 100.

Birnbaum claims he can show that you, as a frequentist error statistician, must grant that it is equivalent to having fixed n= 100 at the start (i.e., experiment E’)

The (strong) LikelihoodPrinciple (LP) is a universal conditional claim:

If two data sets y’and y” from experiments E’ and E” respectively, have likelihood functions which are functions of the same parameter(s) µ

and are proportional to each other, then y’ and y”should lead to identical inferential conclusions about µ

Let’s do the reductio proof:

Start with any violation ofthe LP, that is, a case where the antecedent of the LP holds, and the consequent does not hold, and show you get a contradiction.

Assume then that the pair of outcomes y’ and y”, from E’ and E” respectively, represent a violation of the LP. We may call them  LP pairs.

Birnbaum will describe a funny kind of ‘mixture’ experiment based on an LP pair; You observed y” say from experiment E”.

Having observed y” from the optional stopping (stopped say at n = 100) I am to imagine it resulted from getting heads on the toss of a fair coin, where tails would have meant performing the fixed sample size experiment with n = 100 from the start.

Case 2: If your observed outcome does not have an LP pair, just report it as usual

Only case 1 results matter for the points of the proof we need to consider.

I said it was a funny kind of mixture, there are two things that make it funny:

We may call it Birnbaumizing the result you got; whenever you have observed a potential LP violation, “Birnbaumize” it as above.

Now to obtain the p-value we must use the defined sampling distribution of TBB—the convex combination:

(the ½ comes from the imagined fair coin)

Having thus “Birnbaumized”the particular LP pair that you actually observed, it appears that you must treat y’ as evidentially equivalent to its LP pair, y”.

The test statistic TBB is a sufficient statistic, technically, but the rest of the argument overlooks that an error statistician still must take into account the sampling distributions at each step.

At this step, it refers tothe distribution of TBB.

But it changes in the second step, and that’s what dooms the ‘proof’, as we will now see.

1. Premise 1: Inferences from y’and y”, using the sampling distribution of the convex combination, are equivalent (Birnbaumization):

2 Premise2 (a): An inference from y’ using (i.e., conditioning on) the sampling distribution of E’ (the experiment that produced it), is p’

Premise 2 (b): An inference from y” using (i.e., conditioning on) the sampling distribution of E” (the experiment that produced it), is p”

It would follow of course that p’ equals p”!

Thus it would appear the frequentist is led into a contradiction.

The problem?  There are different ways to show it, as always; here I allowed the premises to be true.

In that case this is an invalid argument, we have all true premises and a false conclusion.

1. the two outcomes get the same convex combo p-value if I play the Birnbaumization game

2. if I condition, the inferences from y” and y’ are p” andp’, respectively

We can put it in a valid form but then the premises can never both be true at the same time:

It’s not even so easy to put it in valid form (see my paper for several attempts):

Premise 2 (a): An inference from y’ should use (i.e., conditioning on) the sampling distribution of E’ (the experiment that produced it)

Premise 2 (b): An inference from y” should use (i.e., conditioning on) the sampling distributionof E” (the experiment that produced it):

Usually the proofs just give the bold parts

Which is the LP!

Contradicting the assumption that y’ and y” form an LP violation!

The problem now is this:  in order to infer the conclusion the premises of the argument must be true, and it is impossible to have premises (1) and (2) true at the same time:

Premise (1) is true only if we use the sampling distribution given by the convex combinations (averaging over the LP pairs).

I plan to give the audience a handout of chapter 7III, Error and Inference (Mayo and Cox 2010).  Then I can point them to pages. http://www.phil.vt.edu/dmayo/personal_website/ch%207%20mayo%20birnbaum%20proof.pdf

Although I have allowed premise (1) for the sake of argument, the very idea is extremely far-fetchedand unmotivated.[iii]

Pre-data, the frequentist would really need to consider all possible pairs that could be LP violationsand average over them….

It is worth noting that Birnbaum himself rejected the LP (Birnbaum 1969, 128): “Thus it seems that the likelihood concept cannot be construed so as to allow useful appraisal, and thereby possible control, of erroneous interpretations.”

References, to be added.

*I gratefully acknowledge Sir David Cox’s advice and encouragement on this and numerous earlier drafts.

[1]I will always mean the “strong” likelihood principle.

[2] In the context of error statistical inference, this is based on the particular statistic and sampling distribution specified by E.

[ii] We think this captures the generally agreed upon meaning of the LP although statements may be found that seem stronger. For example, in Pratt, Raiffa, and Schlaifer, 1995:

[iii] Cox thinks I should say more about the very idea of premise (1).  He is right; but this is to be a very short talk, and this is not a short topic.  References will be added shortly.

Birnbaum, A. (1962). On the Foundations of Statistical Inference (with discussion), Journal of the American Statistical Association, 57: 269–326.

Cox D. R. and Mayo. D. (2010). “Objectivity and Conditionality in Frequentist Inference” in Error and Inference: Recent Exchanges on Experimental Reasoning, Reliability and the Objectivity and Rationality of Science, edited by D Mayo and A. Spanos, Cambridge: Cambridge University Press: 276-304.

Mayo, D. (1996).  Error and the Growth of Experimental Knowledge.  The University of Chicago Press (Series in Conceptual Foundations of Science).

Mayo, D. (2010).  “An Error in the Argument from Conditionality and Sufficiency to the LikelihoodPrinciple.”  In  Error and Inference: Recent Exchanges on Experimental Reasoning, Reliability and the Objectivity and Rationality of Science, edited by D. Mayo and A. Spanos,  Cambridge University Press. 305-314.

Mayo, D. and D. R. Cox. (2011) “Statistical Scientist Meets a Philosopher of Science: A Conversation with Sir David Cox.”  Rationality, Markets and Morals (RMM): Studies at the Intersection of Philosophy and Economics. Edited by M. Albert, H. Kliemt and B. Lahno.  An open access journal published by the Frankfurt School: Verlag. Volume 2, (2011), 103-114.  http://www.frankfurt-school-verlag.de/rmm/htdocs/st01.html

Mayo D. and A. Spanos, eds. (2010).  Error and Inference: Recent Exchanges on Experimental Reasoning, Reliability and the Objectivity and Rationality of Science, Cambridge: Cambridge University Press.

2 thoughts on “Part II: Breaking Through the Breakthrough* (please start with Dec 6 post)”