U-PHIL: "So you want to do a philosophical analysis?" 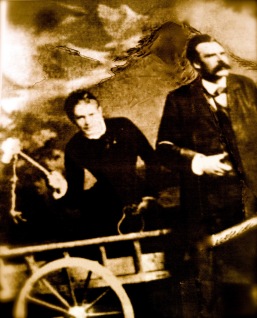 “Philosophy, as I have so far understood and lived it, means living voluntarily among ice and high mountains—seeking out everything strange and questionable in existence”. Nietzsche*
I am about to turn to philosophical analyses/deconstructions of short portions of articles from the special issue “Statistical Science and Philosophy of Science” (RMM 2011),  and I will invite contributed analyses from readers and, of course, the author(s).  The first text, to be posted tomorrow, will be from Professor Stephen Senn. (Full article)
I will post some (after a week or so) as with the last “deconstruction” exercise.
Since we’ve been at this for a while, I’m assuming that you’re anxious to try out your philosophical muscles. So, to begin, hold (a portion of) the text at “arm’s length,” as it were. Cycle around it, slowly. Give it a generous interpretation, then cycle around it again self-critically. Try and challenge the text but also your initial impressions, give reasons, maybe include some pondering “aloud” of what you wrote.

Stop there. Or, try to imaginatively consider how to push the problem/argument a bit further: Which of the assumptions are shaky? What are the gaps? How would it advance the author’s goal to fill them?

If you don’t typically write philosophy, then this little exercise should produce something that feels a bit strange, even foreign. But it should be fun, and Lou Salome is saying that it would be good for you.
*Contest: Nietzsche readers will immediately find the single most glaring error in this famous (posed) picture.  What is it?

3 thoughts on “U-PHIL: "So you want to do a philosophical analysis?"”