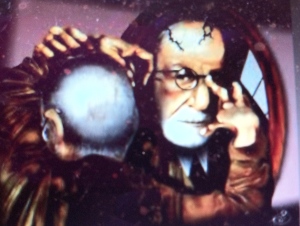 A couple of readers sent me notes about a recent post on (Normal Deviate)* that introduces the term “frequentist pursuit”:

If you want good frequentist properties just use the frequentist estimator.”(Robins and Wasserman)

I take it that the Bayesian response to the question (“why bother?”) is that the computations yield that magical posterior (never mind just how to interpret them).

Cox and Mayo 2010 say, about a particular example of  “frequentist pursuit”:

“Reference priors yield inferences with some good frequentist properties, at least in one-dimensional problems – a feature usually called matching. … First, as is generally true in science, the fact that a theory can be made to match known successes does not redound as strongly to that theory as did the successes that emanated from first principles or basic foundations. This must be especially so where achieving the matches seems to impose swallowing violations of its initial basic theories or principles.

Even if there are some cases where good frequentist solutions are more neatly generated through Bayesian machinery, it would show only their technical value for goals that differ fundamentally from their own.” (301)

Imitation, some say,  is the most sincere form of flattery.  I don’t agree, but doubtless  it is a good thing that we see a degree of self-imposed and/or subliminal frequentist constraints on much Bayesian work in practice.  Some (many?) Bayesians suggest that this is merely a nice extra rather than necessary, forfeiting the (non-trivial) pursuit of  frequentist (error statistical foundations) for Bayesian pursuits**.

*I had noticed this, but had no time to work through the thicket of the example he considers. I welcome a very simple upshot.

**At least some of them.