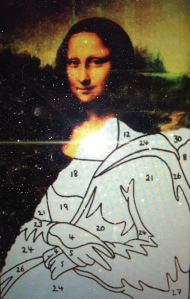 In an exchange with an anonymous commentator, responding to my May 23 blog post, I was asked what I meant by an argument (in favor of a method) based on “painting-by-number” reconstructions. “Painting-by-numbers” refers to reconstructing an inference or application of method X (analogous to a method of painting) to make it consistent with an application of method Y (painting with a paint-by-number kit). The locution comes from EGEK (Mayo 1996) and alludes to a kind of argument sometimes used to garner “success stories” for a method: i.e., show that any case, given enough latitude, could be reconstructed so as to be an application of (or at least consistent with) the preferred method.

Referring to specific applications of error-statistical methods, I wrote in (EGEK, (pp. 100-101):

We may grant that experimental inferences, once complete, may be reconstructed so as to be seen as applications of Bayesian methods—even though that would be stretching it in many cases. My point is that the inferences actually made are applications of standard non-Bayesian methods [e.g., significance tests]. . . . The point may be made with an analogy. Imagine the following conversation:

Paint-by-number artist to Leonardo Da Vinci: I can show that the Mona Lisa may be seen as the result of following a certain paint-by-number kit that I can devise. Whether you know it or not you are really a painter by number.

If the argument doesn’t hold up for painting-by-numbers, I allege, it does not hold up for reconstructing methods.

(More specifically, the commentator suggests that any error-statistical “supplement” I might think was needed could in fact be interpreted so as to already be part of the Bayesian diet. But the reconstruction would not have weight if it were merely like painting-by-numbers.)

From this analogy, I deny the commentator’s suggestion that in order to show “that the philosophical differences between paradigms matter and merit investigation, one has to give real-world examples where useful methods cannot be viewed as e.g. Bayesian.” Reconstructions are too readily available; yet we see the relevance of philosophical issues, both within and between statistical philosophies. The reader may find examples offered by contributors in RMM’s special topic on “Statistical Science and Philosophy of Science” and in this blog.

At the same time, I readily admit RMM paper:

I would never be so bold as to suggest that a lack of clarity about philosophical foundations in any way hampers progress in statistical practice. Only in certain moments do practitioners need a philosophical or self-reflective standpoint. Yet those moments, I maintain, are increasingly common.