A famous chestnut given by Cox (1958) recently came up in conversation. The example  “is now usually called the ‘weighing machine example,’ which draws attention to the need for conditioning, at least in certain types of problems” (Reid 1992, p. 582). When I describe it, you’ll find it hard to believe many regard it as causing an earthquake in statistical foundations, unless you’re already steeped in these matters. If half the time I reported my weight from a scale that’s always right, and half the time use a scale that gets it right with probability .5, would you say I’m right with probability ¾? Well, maybe. But suppose you knew that this measurement was made with the scale that’s right with probability .5? The overall error probability is scarcely relevant for giving the warrant of the particular measurement,knowing which scale was used. 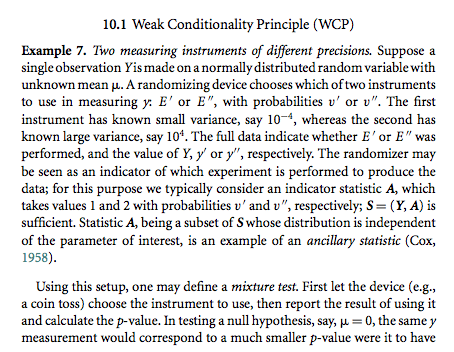 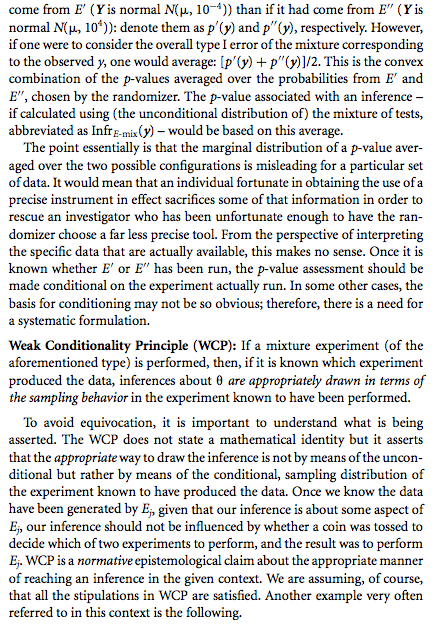 It had long been thought that the (WCP) entails the (strong) Likelihood Principle (LP) which renders error probabilities irrelevant  to parametric inference once the data are known. I give a disproof in Mayo (2010), but later recognized the need for a deeper argument which I gave in Mayo (2014). .If you’re interested, the ink to Statistical Science includes comments  by Bjornstad, Dawid, Evans, Fraser, Hannig, and Martin and Liu. You can find quite a lot on the LP searching this blog; it was a main topic for the first few years of this blog.

Cox D. R. and Mayo. D. G. (2010). “Objectivity and Conditionality in Frequentist Inference” in Error and Inference: Recent Exchanges on Experimental Reasoning, Reliability and the Objectivity and Rationality of Science (D Mayo and A. Spanos eds.), Cambridge: Cambridge University Press: 276-304.

Mayo, D. G. (2010). “An Error in the Argument from Conditionality and Sufficiency to the Likelihood Principle” in Error and Inference: Recent Exchanges on Experimental Reasoning, Reliability and the Objectivity and Rationality of Science (D Mayo and A. Spanos eds.), Cambridge: Cambridge University Press: 305-14.