This headliner appeared before, but to a sparse audience, so Management’s giving him another chance… His joke relates to both Senn’s post (about alternatives), and to my recent post about using (1 – β)/α as a likelihood ratio--but for very different reasons. (I’ve explained at the bottom of this “(b) draft”.)

….If you look closely, you’ll see that it’s actually not Jay Leno who is standing up there at the mike, (especially as he’s no longer doing the Tonight Show) …. 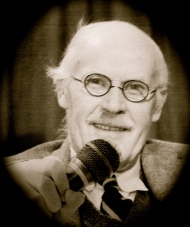 It’s Sir Harold Jeffreys himself! And his (very famous) joke, I admit, is funny. So, since it’s Saturday night, let’s listen in on Sir Harold’s joke* in criticizing the use of p-values.

“Did you hear the one about significance testers rejecting H0 because of outcomes H0 didn’t predict?

‘What’s unusual about that?’ you ask?

What’s unusual is that they do it when these unpredicted outcomes haven’t even occurred!”

[The actual quote from Jeffreys: Using p-values implies that “An hypothesis that may be true is rejected because it has failed to predict observable results that have not occurred. This seems a remarkable procedure.” (Jeffreys 1939, 316)]

I say it’s funny, so to see why I’ll strive to give it a generous interpretation. END_OF_DOCUMENT_TOKEN_TO_BE_REPLACED

Continuing the discussion on truncation, Bayesian convergence and testing of priors

My post “What’s wrong with taking (1 – β)/α, as a likelihood ratio comparing H0 and H1?” gave rise to a set of comments that were mostly off topic but interesting in their own right. Being too long to follow, I put what appears to be the last group of comments here, starting with Matloff’s query. Please feel free to continue the discussion here; we may want to come back to the topic. Feb 17: Please note one additional voice at the end. (Check back to that post if you want to see the history)

I see the conversation is continuing. I have not had time to follow it, but I do have a related question, on which I’d be curious as to the response of the Bayesians in our midst here.

Say the analyst is sure that μ > c, and chooses a prior distribution with support on (c,∞). That guarantees that the resulting estimate is > c. But suppose the analyst is wrong, and μ is actually less than c. (I believe that some here conceded this could happen in some cases in whcih the analyst is “sure” μ > c.) Doesn’t this violate one of the most cherished (by Bayesians) features of the Bayesian method — that the effect of the prior washes out as the sample size n goes to infinity?

The short answer is that assuming information such as “mu is greater than c” which isn’t true screws up the analysis. It’s like a mathematician starting a proof of by saying “assume 3 is an even number”. If it were possible to consistently get good results from false assumptions, there would be no need to ever get our assumptions right. END_OF_DOCUMENT_TOKEN_TO_BE_REPLACED