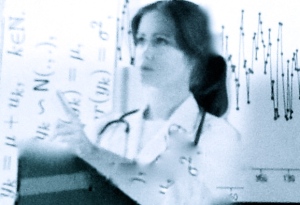 The Nature of the Inferences From Graphical Techniques: What is the status of the learning from graphs? In this view, the graphs afford good ideas about the kinds of violations for which it would be useful to probe, much as looking at a forensic clue (e.g., footprint, tire track) helps to narrow down the search for a given suspect, a fault-tree, for a given cause. The same discernment can be achieved with a formal analysis (with parametric and nonparametric tests), perhaps more discriminating than can be accomplished by even the most trained eye, but the reasoning and the justification are much the same. (The capabilities of these techniques may be checked by simulating data deliberately generated to violate or obey the various assumptions.)

The combined indications from the graphs indicate departures from the LRM in the direction of the DLRM, but only, for the moment, as indicating a fruitful model to probe further.  We are not licensed to infer that it is itself a statistically adequate model until its own assumptions are subsequently tested.  Even when they are checked and found to hold up – which they happen to be in this case – our inference must still be qualified. While we may infer that the model is statistically adequate – this should be understood only as licensing the use the model as a reliable tool for primary statistical inferences but not necessarily as representing the substantive phenomenon being modeled.

END_OF_DOCUMENT_TOKEN_TO_BE_REPLACED

If you try sometime, you find you get what you need!

Posted on November 29, 2011 by Mayo
Thanks to Nancy Cartwright, a little ad hoc discussion group has formed: “PhilErrorStat: LSE: Three weeks in (Nov-Dec) 2011.”  I’ll be posting related items on this blog, in the column to your left, over its short lifetime. We’re taking a look at some articles and issues leading up to a paper I’m putting together to give in Madrid next month on the Birnbaum-likelihood principle business (“Breaking Through the Breakthrough”) at a conference (“The Controversy about Hypothesis Testing,” Madrid, December 15-16, 2011).  I hope also to get this group’s feedback as I follow through on responses I’ve been promising to some of the comments and queries I’ve received these past few months. END_OF_DOCUMENT_TOKEN_TO_BE_REPLACED
Categories: Statistics | Tags: all models are wrong, Christian Robert, Models/Modelling, PhilErrorStat:LSE, piecemeal inquiry