When the rejection ratio (1 – β)/α turns evidence on its head, for those practicing in an error-statistical tribe (ii)

I’m about to hear Jim Berger give a keynote talk this afternoon at a FUSION conference I’m attending. The conference goal is to link Bayesian, frequentist and fiducial approaches: BFF.  (Program is here. See the blurb below [0]).  April 12 update below*. Berger always has novel and intriguing approaches to testing, so I was especially curious about the new measure.  It’s based on a 2016 paper by Bayarri, Benjamin, Berger, and Sellke (BBBS 2016): Rejection Odds and Rejection Ratios: A Proposal for Statistical Practice in Testing Hypotheses. They recommend:

“The (pre-experimental) ‘rejection ratio’ Rpre , the ratio of statistical power to significance threshold (i.e., the ratio of the probability of rejecting under H1 and H0 respectively), is shown to capture the strength of evidence in the experiment for H1 over H0 .”

If you’re seeking a comparative probabilist measure, the ratio of power/size can look like a likelihood ratio in favor of the alternative. To a practicing member of an error statistical tribe, however, whether along the lines of N, P, or F (Neyman, Pearson or Fisher), things can look topsy turvy.

I’ll follow their example that gives an easy to grasp figure involving Normal testing with a point µ= 0 vs µ ≠0. I will follow them in letting H1 be a particular point alternative. 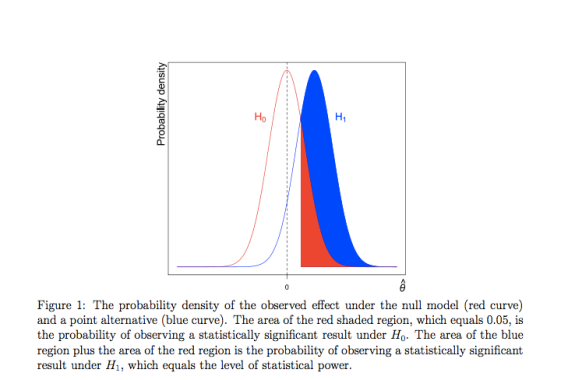 The red area is the probability of a Type 1 error, α. The Rejection ratio = (red area + blue area)/red area

Without any computations, we see that the further away one chooses the point value for H1 , dragging it to the right, the more blue area and hence the higher the rejection ratio (for a fixed α-level), hence the stronger the comparative impact of a statistically significant result, at least on this pre-data measure. But wait, this is at odds with N-P-F (Neyman-Pearson-Fisher) testing reasoning and confidence interval logic. (A related post is here.)

Then according to BBBS, or so it appears, a positive 0.05 significant result from (the same test T) is stronger evidence for the larger discrepancy µ” than it is for the smaller discrepancy µ’. [1] This gets to one of one of my pet peeves in contemporary uses of power. I realize they later want to consider priors in the parametric hypotheses and Bayes factors, so maybe this saves the day (for them). But then it’s not clear why they include the pre-data rejection ratio, unless maybe for cases of diagnostic testing (with binary results).

Yet, look what happens if we compare the corresponding confidence levels for the inferences[2]:

In the second case, µ > 3  is the lower confidence interval (CI) at level .16!  That’s terrible evidence for a discrepancy so large.[3]

Jim Berger is always coming up with intriguing measures that are to have frequentist (and Bayesian) justifications; but I always find they have similar flaws. I could recommend one or two that might work!

I may come back to this later on.

April 12 update: So Jim Berger granted my point, saying he hadn’t really thought about this untoward result, but noted that power/alpha was used in high throughput testing. He said it only made him more inclined to opt for the post-data Bayes factor discussed in the paper (which I don’t take up here). (Jim will correct me if I’ve got any of this wrong.)

[0]The objective of this two-and-half day workshop is to study the role and foundations of statistical inference in the era of data science and also its applications in fusion learning. Its main foci are:

Professor Sir David R. Cox (Oxford University) is to deliver a featured address through a video presentation, to be discussed by Professor Nancy Reid (University of Toronto). Professors Jim Berger (Duke University) and Brad Efron (Stanford University)  are to deliver the keynote addresses, to be followed by many more distinguished lecturers and discussions.

The workshop will bring together statisticians and data scientists across the aisles to address issues related to the foundation of statistical inferences and its applications to combining information and fusion learning. This workshop will help disseminate new developments of coherent BFF inferences and new advances in statistical inferences and their applications to both within the field of statistics and all fields that use statistics. It is sponsored by Rutgers Statistics Department, DIMACS center and the National Science Foundation (NSF).

They sometimes suggest that “BFF” is also supposed to echo the “best friends forever” meme. The program and a link to abstracts is here.

[3] As Stephen Senn points out (in my favorite of his posts), the alternative against which we set high power is the discrepancy from the null that “we should not like to miss”, delta Δ.  Δ is not the discrepancy we may infer from a significant result (in a test where POW(Δ, ) = .84).

OTHER RELEVANT POSTS ON POWER

31 thoughts on “When the rejection ratio (1 – β)/α turns evidence on its head, for those practicing in an error-statistical tribe (ii)”